Every Little Helps: The rise of the Data Supermarket

Gartner recently declared that “the data centre is dead”.  But what do they mean by data centre? Terms like hyperscale, enterprise, CoLo, edge, micro, server room, HPC and cloud have rendered the term almost redundant.   As the industry has grown it has fragmented and mutated, resulting in a multitude of terms now used to describe the physical locations data is stored.   Gartner’s use of the term “data centre” actually refers to the traditional on-premise server rooms that organisations used to rely on for storing the data they needed to function.  As companies search for more scalable, flexible and manageable data solutions, they are turning in droves to the cloud.  CoLo providers are the big winners from this seismic shift and are swooping in, willing and eager to hoover up the megabytes on offer.

Colocation providers are using economies of scale to become “supermarkets” of data.  They are deploying large scale facilities at scale offering everything under one roof at a cost effective price point.  Supermarkets have grown to dominate the grocery market due to their convenience and price, gained through buyer power and scalability.  Similarly, the colocation market is beginning to consolidate around several mega players who can use their leverage to buy land, secure grid connections, do international deals for critical infrastructure and sell white space off-plan.  This business model relies on scale and efficiency and for supply chain partners, the reward of long term contracts has to be earned through the ability to match the ambitions of their customers.  As with supermarkets, potential suppliers to the new breed of CoLos must be able to accommodate large production volumes, be flexible in order to cope with changing demand and show engineering ingenuity in order to deliver solutions that push the envelope of what has gone before. 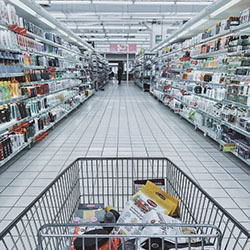 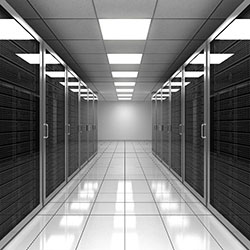 Take cooling as an example.  The cooling of servers represents around 40-50% of the energy consumed by a data centre.  Therefore it is no surprise that these super-colos are laser-focussed on how to achieve maximum efficiencies in their cooling solutions.  Making best use of real estate is a key driver for CoLo providers and therefore, as with the shelves in a supermarket, any floorspace not taken up by servers costs the provider money.  This means maximising server density and maximising the efficiency of indoor CRAC units or removing them altogether by utilising fan walls in adjacent plant rooms.

As with supermarkets, the global CoLo market is beginning to be dominated by a small number of huge players.  They compete on price and availability as they know consumers have a choice and are unlikely to be loyal to one provider.  This means that marginal gains are important in order to gain an edge.  With cooling representing such a large percentage of data centre running costs, manufacturers are under pressure to innovate.

Fan walls have come to prominence in data centres in recent years with many developers selecting them due to the removal of a need for a raised floor.  Fan walls work particularly well in data centres with hot aisle containment; the pressure differential between the hot and cold aisles does the bulk of the work, with the fan wall able to operate at a low fan speed.  Air is returned to the fan wall via a common plenum in the ceiling creating a constant recirculation of air and avoiding the mixing of hot and cold air streams. Fan walls designed for their environment and considered as part of an intelligent system can bridge the gap between air handling unit and precision cooling.  Cooling systems utilising fan walls can be designed to operate with optimised air and water side conditions, thus maximising free cooling and operating efficiencies.

What is encouraging from a manufacturer’s perspective is that CoLo providers are more than willing to engage directly with them in order to facilitate this kind of innovation.  They are willing to invest in technology that will give them an edge and aren’t obsessed with up front capital cost, preferring instead to take a holistic view of CAPEX and OPEX.  This is a refreshing change from other sectors where contractors hold the power and will dilute specifications in order to screw down prices.  The perfect storm of a market in growth, healthy competition and a desire to improve is driving the industry to new levels which we can all benefit from.

As with supermarkets, it seems like super-colocation is here to stay.  The data centre isn’t dead, people are just shopping in different places.

Necessary cookies are absolutely essential for the website to function properly. This category only includes cookies that ensures basic functionalities and security features of the website. These cookies do not store any personal information.
These cookies do not require your prior consent: we automatically set them on your device when you access the website. They are usually only set in response to actions made by you which amount to a request for services, such as setting your privacy preferences, logging in or filling in forms. You may decide to disable cookies or alert you at any time by changing the relevant browser’s settings. However, this may prevent you from correctly displaying the website and some parts of the site will not then work.

To further improve our offer and our website, we collect data for statistics and analysis, for us or third parties. With the help of these cookies we can, for example, determine the number of visitors and the effect of certain pages of our website and optimize our content. These cookies can only be installed upon user prior consent.

Cookies used to improve website performance, specifically used for gathering data on how users surf the website, monitor the performance of the site: which pages are visited more often, error messages, bounce rates, load speeds and similar. These cookies can only be installed upon user prior consent.

Functional cookies can also be used to enable us to save your preferences and settings and so enhance your browsing experience on our website by storing your identity as a registered user of the website. To do that please flag the “Save me” button. To ensure proper operation of such functional cookies and ensure recording of your preferences, these cookies shall not be deleted when you finish browsing. Anyway, your preferences shall have a validity of maximum 2 years, after which they will be automatically reset.