In the air conditioning world, the “F-word” that is on everyone’s lips, is F-gas!

Before we get to the interesting stuff, let’s start with hello. My name is Jade Swan-McCay and I’m starting this quarterly blog about what’s going on in our Research and Development (R&D) department. I am not a blogging guru, I am a laboratory engineer at Airedale. So I work in R&D, specifically in the Test Laboratory in Leeds, UK where we test things (shocker); distinctively, test our products with respect to cooling performance as well as electrical, mechanical and controls performance. There are also a number of other things we get to test but let’s get to the topic of today…

The European F-gas Directive is all about the restriction of fluorinated greenhouse gases which includes hydrofluorocarbons (HFCs) – commonly used as refrigerants for air conditioning. This is a regulation which has been adopted by the European Union to phase-down the usage of refrigerants which have a high Global Warming Potential (GWP). Stay with me, I’ll explain this a little bit further down. Since the most common refrigerants used (e.g. R410A, R134a), by us and industry wide, are affected by this regulation, there has been a drive lately to move away from these refrigerants.

At Airedale we have always taken our environmental responsibilities seriously (the green in our logo isn’t just a fashion statement!) and for several years we have focused a large proportion of our R&D resources on moving towards suitable replacements. This development work for us started before the current F-gas regulations were introduced and started forcing the wider industry’s hand. This has helped create a level playing field in some respects but also helps us as a proactive business stay one step ahead. First with our low GWP TurboChill Range with R1234ze rather than R134a and now in 2019 we are ready to launch our R410A replacement chillers, the Ultima and DeltaChill ranges, both with R32. 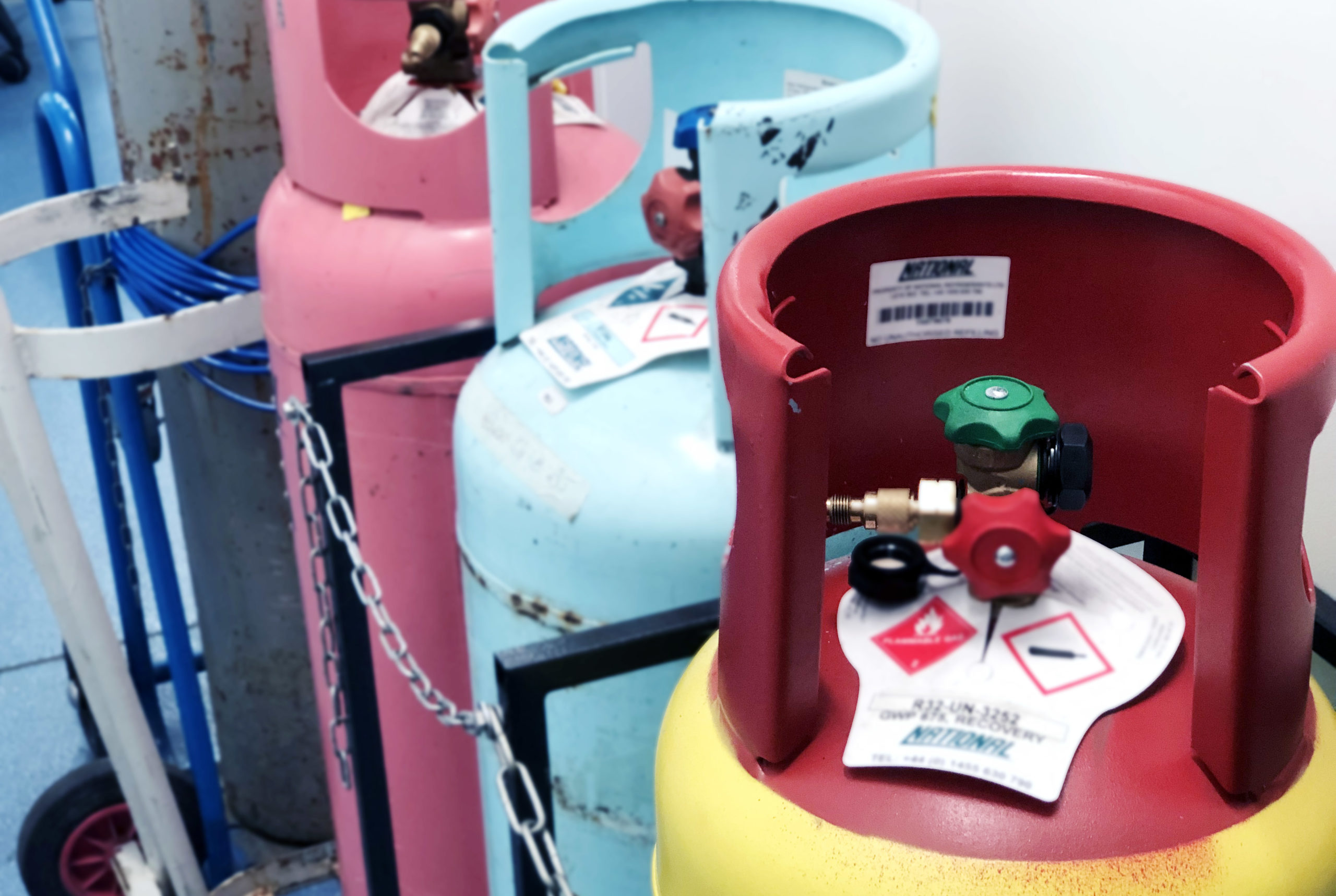 For many this will seem like a lot of jargon… so what is GWP and how does a refrigerant rate highly on the scale?

Refrigerants are rated on how they contribute to global warming in comparison to weight of CO2. There’s more information on gov.uk here>> Gases above a certain GWP will not be specifically banned but will be reduced in availability over the coming years.

Why should we care?

Good question! Firstly, (and arguably most importantly) we all have a responsibility to our planet. If a refrigerant is rated to be 2000 times worse than the equivalent weight in CO2 released to the atmosphere, then surely it’s right that there is a push for change? Environmental responsibility is a topic that a lot of businesses talk about but don’t always put much conviction into. Whereas, we have proved our commitment to environmental sustainability.

In 2014 we were one of the first companies to release a chiller with a R134a replacement (TurboChill range with R1234ze); before the introduction of the new F-gas regulations in 2015. This chiller range offered a replacement for R134a (GWP of 1430) with R1234ze which has a GWP of 7! That’s extremely close to the equivalent weight of CO2!

We were able to achieve this milestone because we have a dedicated test laboratory with experienced laboratory engineers, so we have the facilities to build and test our products extensively in conjunction with our design engineers. We not only work on designing new products, we are also dedicated to regularly updating existing products. One thing we are striving towards is low GWP on all product ranges. Unfortunately, R1234ze isn’t appropriate for all applications we cater for so we have been looking to find a suitable replacement for R410A. 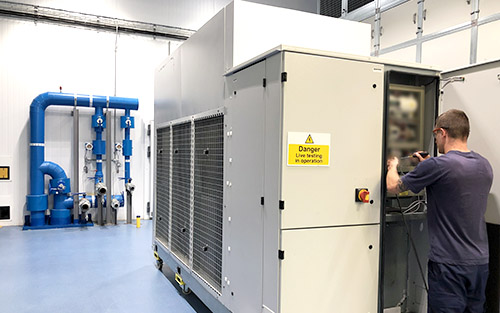 As the phase-down is proceeding, the amount of high GWP refrigerants like R410A on the market will significantly drop. When there’s very little quantity and a high demand… prices skyrocket.  We have already seen companies stockpiling refrigerants as well as businesses outside of the industry applying for quota they don’t necessarily need (e.g. butchers, florists, etc…) in order to sell it for a profit. Both of which have affected the price considerably, even if they are stable for now, it is reasonable to expect this to increase again in the future. This could lead to hefty service costs for maintaining air conditioning products on top of an increase in price for the initial bulk required for a new unit. This is not ideal for companies manufacturing the products or for the customers purchasing them. It seems to have also started a black market of smuggling and selling high GWP refrigerants across borders. You can see the impact yourself in this article! >>

Initially, it was difficult to gauge which refrigerants the industry would lean towards. We are, after all, reliant on the compressor, expansion valve technology etc… for the alternatives to be available (without compromising on quality!). Our Research Team, spent years investigating alternatives to find a suitable replacement for R410A with emphasis on the potential use of mildly flammable (A2L) refrigerants and regulations around them. With refrigerant producers releasing more and more because there was no clear direction the industry was going in, it left an extremely wide range of options.

Sounds great right? Unfortunately not, imagine being in a shop and needing a particular item but you find there are thousands of the same item with very slight variations… How do you decide which one to choose and what are the consequences of a wrong decision? You can’t exactly try everyone until you find the one that works practically for the scenario – the time and resources would be huge! So what our Research Team did was compile a data base of pros and cons for them all with energy analysis to see which would be best suited to replace R410A. After an extensive investigation they managed to narrow it down to R32 so we built a unit and started testing because nothing beats real life data after all.

Firstly, the GWP of R32 is 675 compared to 2088 for R410A! Also, the properties are very close and after the initial investigation it was given the seal of approval from our Research Team as the best alternative. This was based on the performance comparison and ability to replace R410A with ideally minimal changes to the existing units. Even though, once testing began it was evident this would not be the case and the design engineers got to work redesigning the units to accommodate R32.

Ok, let’s discuss the flammability classification. R32 is classified as an A2L refrigerant which means it’s mildly flammable. Sounds alarming, I know, but rest assured the dangers involved in this classification are incredibly low. Generally speaking, the lower the GWP of a refrigerant, the more unstable it is – meaning it breaks down more readily in the atmosphere, in comparison to a more stable, high GWP refrigerant. All of the refrigerants that were appropriate replacements were flammable to some degree. When we are talking A2Ls, however, we aren’t talking anywhere near the same level of flammability/explosiveness as hydrocarbons like propane (R290), isobutane (R600a), etc…This is a new classification (recognised in EN378 in 2016) for any flammable refrigerant with a burning velocity of less than 10cm/s as well as requiring a high ignition energy to cause ignition (electrical arcs are unlikely to light it) and a very specific concentration to burn in air. In essence, it is unlikely to ignite an A2L refrigerant and there would need to be a  specific quantity released to burn. Even then, you could out run any flames but they will most likely self-extinguish! With high quality manufacturing including permanent/brazed joints, R32 is very low risk. Some common myths are discussed here >>

It certainly hasn’t been a simple replacement!

When we started testing R32 in one of our R410A units, there wasn’t a large amount of real life data on how it would perform as a direct replacement, other than it wouldn’t work specifically as a “drop-in”. To assess the difference and to help our design process we attempted to run some testing using it as a “drop in” replacement. This can be dangerous so numerous safety precautions were considered before testing began. We saw a number of issues with oil return to the compressors – great if you are trying to burn out your compressors! We quickly learned, due to density differences among other properties, there was a lot of design work required so the project was underway to redesign all relevant components. A number of engineers have been involved for a couple of years now testing the refrigerant in our prototype units to the extremes to understand the performance fully.

After ironing out all of the issues, with an amazing amount of work from all of our engineers involved (and  working closely with component suppliers), we are now extremely happy to be releasing our R32 chiller ranges.

It is great to have this project achieve its goal and we are excited to see how customers respond. However, we are nowhere near done. After all, this is a step in the right direction but the ultimate goal will always be low GWP across the board.

This is the first of many quarterly blog posts, keeping you all updated on what we are getting up to in R&D. Keep in the loop by liking/following our social media pages!