The data centre industry’s rapid expansion in recent years is well documented and shows no sign of abating.  However, with great power comes responsibility.  A recent report suggests that by 2025, data centres will consume one-fifth of all the electricity in the world.  Stats like this have served to bring the sector under the spotlight and it has come under increasing pressure in recent years to reduce its carbon footprint and operate more efficiently.

The primary source of energy consumption in most data centres is cooling. This energy usage mainly comes from large industrial equipment such as pumps, chillers and cooling towers, which are used to regulate data centre temperature. It is important for the air conditioning industry to take its energy efficiency responsibilities seriously.
Measures like Power Usage Effectiveness (PUE) have helped steer the industry down a greener path  and technological strides have been made in order to increase efficiencies, but PUE doesn’t tell the whole story.  The use of water in data centres is increasingly coming under the microscope.

We live on a blue planet…yet only 1% of the world’s water is useable.  Growing populations, intensive urbanisation and industrialisation are putting strains on this 1% like never before.  In 2015 the World Economic Forum in Davos listed “water crises” for the first time as the world’s leading threat and this is not a crisis limited to developing countries. As an industry we cannot ignore this.

Around ten years ago, the optimisation of air temperatures was introduced as the latest way for data centres to increase efficiencies.  At the time, many data centres ran at 20°C to 22°C.  However, as server technology advanced, data centres were able to run at higher temperatures which reduced the cooling requirement and provided more opportunity to utilise free-cooling. Airedale International pioneered this with the introduction of chillers specifically designed to take advantage of the free-cooling opportunity, resulting in a lower cost of ownership for operators.

In recent years, air-side optimisation has been built on with the introduction of adiabatic cooling systems.  This technique incorporates both evaporation and air cooling into a single system.  The evaporation of water, usually in the form of a mist or spray, is used to pre-cool the ambient air to within a few degrees of the wet bulb, allowing cooler and more efficient operation.

The use of spray or mist means water use is significantly lower than with more traditional evaporative systems, but a conservative water usage estimate for a modern data centre employing an adiabatic cooling system would still be 500,000 litres /1MW/Annum.  As data centres grow larger, this becomes a real concern, particularly in regions where water shortages have been identified as a threat.  To put the figures in context, a typical 50MW data centre employing adiabatic cooling would use approximately 25,000,000 litres per year, about the same as 152 UK houses.

The water usage itself is not even the whole story.  This water still has to be stored and treated which increases capital costs and as with any mechanical equipment exposed to continuous water contact, cooling plant has been seen to suffer from increased degradation, putting strain on OPEX costs too.

Having recognised the need for cooling systems that provide something close to the efficiencies that can be achieved with adiabatic cooling, but with a more sensitive approach to water conservation, Airedale developed an innovative approach to data centre cooling, that takes the philosophy behind air side optimisation and evolves it further. Airedale call this Water Side Optimisation. And Water Side optimisation is proving its worth in many of the world’s leading data centres already.
The philosophy of Water Side optimisation is based on taking an optimised air environment and looking at what other variables can be adjusted in order to deliver more free-cooling. Assuming that the air within the data centre white space stays at the same temperature, the next step was to reduce the approach temperature whilst opening the difference between water supply and water return.   Implementing innovations within the plant equipment means the supply and return air remain as before, but supply and return water temperatures are higher, thus the approach temperature is reduced. We see a fixed temperature difference of 12°C TD on the air side with the fluid side being opened out to 10°C and the approach temperature closing from 6°C to 4°C.

To achieve this, free-cooling chillers are matched to large surface area chilled water coils in either indoor CRAC units or fan walls.  The air path is simplified using hot aisle containment, creating a pressure differential that draws cool air through the servers and out of the white space via ducts and back to the air conditioning plant via a common plenum.  The air is introduced directly to the space via side wall diffusion, minimising air side pressure drops.

Based on average temperatures for London, an extra 2°C creates many more hours of free cooling.  14% more free cooling (59% in total) can be achieved with Water Side Optimisation, with all but 1% of the rest of the year being covered by concurrent cooling (a combination of free cooling and mechanical), giving huge benefits in terms of chiller efficiency.  This system could provide free cooling for over 50% of the year in all of Europe’s major data centre hubs (London, Frankfurt, Amsterdam, Paris, Dublin).

Airedale’s Water Side Optimisation solution is in operation across Europe, offering considerable efficiencies. The graph below demonstrates this performance and how it can benefit the end user whilst minimising the impact on the environment. 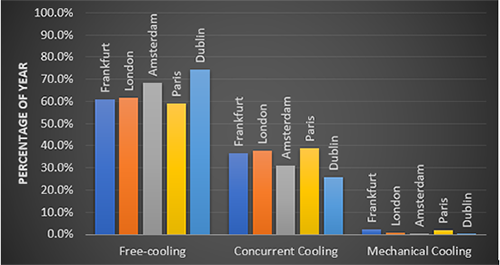