Will you say no to illegal HFCs? 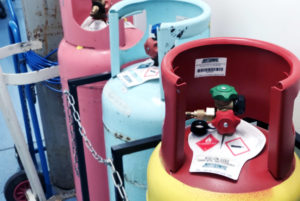 Hydrofluorocarbons, HFCs, refrigerant gases: Whatever you call them, if you work in our industry you know that they play a huge part in day-to-day life from behind the scenes.

These gases are used extensively in air conditioning, but since the arrival of the F-gas regulation in 2015, their consumption has started to be phased down, particularly in Europe. This is because many HFCs have a high GWP (global warming potential), and with an ever brightening spotlight on the global climate emergency, a shift to lower GWP alternatives is rightly being encouraged. The quota system in the F-gas regulation is designed to reduce the overall HFC GWP in Europe by 80% by 2030.

That sounds good, so what’s the issue?

For the most part, we can all now agree that a focus on climate goals is a good thing: Without wanting to go full Mad Max, if the climate emergency worsens to the extent that it could, we’ll have significantly bigger things to worry about than which refrigerants we’re using.

So for the present, while we can worry about these things and take action…We should.

Unfortunately, as many of us take steps towards a greener future, black market activity is undermining the HFC quota. Criminal organisations are smuggling refrigerant gases into Europe, damaging the progress that we need to collectively make in order to achieve goals of becoming carbon neutral.

This is by no means a small amount either;  data collected in 2018 indicates that this black market could have an impact of up to 34 million CO2eqT.

To put that into context, if the black market were a member state of the EU, it would be the 20th largest CO2 emitter, above countries such as Croatia, Estonia and Cyprus. Or to look at it another way, it’s like adding 25 million cars to EU roads.

This is only likely to get worse unless action is taken. The legal quota for HFCs in Europe has, as of January, been reduced from 63% to 45% of the original amount on the EU market. This will undoubtedly drive black market activity to meet demand from those who have been slow to react to the phase down.

How are the smugglers getting away with it? Well, The legitimate supply chain for HFCs is complex:

Criminals can bypass the supply chain with relative ease, simply by offering non-refillable cylinders online, or hiding bulk shipments with customs transit arrangements. Unfortunately, this leads to the illegal HFCs being picked up by legitimate enterprises, who unwittingly bring them into the legitimate supply chain, making them almost impossible to track and identify.

One of the key issues is that the strong legislation for the phase down is not met with particularly strong enforcement at borders. Fines need to be higher, and customs officials need more tools and training to be able to identify illegal HFCs. However, whilst it is obviously imperative that authorities crack down appropriately, this doesn’t mean that organisations can shirk their own responsibilities. If we collectively pull together to take a stand against this activity, and raise awareness, it can still have an impact.

What can we do?

EFCTC have launched a website and pledge that explains the issues, and provides ways that you can take action. The most simple way to get started is to make a pledge, and take it from there. The most crucial thing is to spread the message surrounding the illegal HFC trade, and raise awareness.

Airedale have been banging the drum of sustainable development in line with (and often ahead of) regulation for 40 years, so we are proud that we have pledged to do our part and say no to illegally traded HFC gases. We will continue to work closely with our supply chain partners to make sure that we source HFCs only from reliable and legal sources so that our customers can use our products and services with confidence.

A few steps you can take to be vigilant:

Download the EFCTC fact sheet to see exactly what you need to look out for.

In terms of further direct actions that you can take, if you see something suspicious, you can contact the EFCTC Action Line: https://efctc.integrityline.org/

You might think that this won’t be effective, but according to the EFCTC:

Don’t put a sustainable future (and the reputation of your business) on the line; join Airedale and make a pledge now: https://stopillegalcooling.eu/pledge/

Necessary cookies are absolutely essential for the website to function properly. This category only includes cookies that ensures basic functionalities and security features of the website. These cookies do not store any personal information.
These cookies do not require your prior consent: we automatically set them on your device when you access the website. They are usually only set in response to actions made by you which amount to a request for services, such as setting your privacy preferences, logging in or filling in forms. You may decide to disable cookies or alert you at any time by changing the relevant browser’s settings. However, this may prevent you from correctly displaying the website and some parts of the site will not then work.

To further improve our offer and our website, we collect data for statistics and analysis, for us or third parties. With the help of these cookies we can, for example, determine the number of visitors and the effect of certain pages of our website and optimize our content. These cookies can only be installed upon user prior consent.

Cookies used to improve website performance, specifically used for gathering data on how users surf the website, monitor the performance of the site: which pages are visited more often, error messages, bounce rates, load speeds and similar. These cookies can only be installed upon user prior consent.

Functional cookies can also be used to enable us to save your preferences and settings and so enhance your browsing experience on our website by storing your identity as a registered user of the website. To do that please flag the “Save me” button. To ensure proper operation of such functional cookies and ensure recording of your preferences, these cookies shall not be deleted when you finish browsing. Anyway, your preferences shall have a validity of maximum 2 years, after which they will be automatically reset.